I had an interesting exchange with Meghan Murphy, a leading feminist in Canada. I commented on her site, called FeministCurrent. Her reaction to one of my comments was to reply "Oh gawd. You are full of shit. Stop lying. This is a waste of time if you are just going to be dishonest."

What was my comment that provoked such a reaction? She had written that her abolitionist movement was led by prostitution 'survivors' and that I (unlike them) didn't know what I was talking about. My reply was that Rachel Moran and Rebecca Mott - both 'survivors' - have said things that don't make sense to anyone who knows about the subject.

She accused me of 'saying things that aren't accurate' then of 'lying' and being dishonest.

"You don't go into a factory and have the boss put his penis in your mouth, and the janitor put his penis up your anus. What we need to understand here is that unwanted sex  - even if you are paid for it - is damaging. And it's very flippant and I feel totally inappropriate to compare that to what goes on in a factory."

So it seems that I was accurate when I wrote that 'they don't have to do things they don't want to'. As a punter I know this from experience. Juno Mac and Molly Smith explain this in their book Revolting Prostitutes. Why is Rachel Moran telling people that prostitution is men abusing women in any way they want to, something that wouldn't be tolerated in a workplace, and therefore it can't be a real job? Is that not dishonest?

According to Juno Mac and Molly Smith, Rachel was 'hurt' by people not believing she had been a prostitute. "My truths do not suit them, so my truths must be silenced" she said to Meghan Murphy. Silenced? She's been on radio giving a false statistic (127 prostitutes murdered in the Netherlands after legalization) and on TV saying that prostitution can't be a real job because someone will 'put his penis up your anus'.

Which of your truths do you expect people to accept, Rachel? The TV truth or the autobiography truth? For the record, I do accept that you used to be a prostitute, but if you want people to believe you then you have to stop the false statistics and the contradictions.

When you were a prostitute, was that a real job because nobody put his penis up your anus, and they only put their penis in your mouth because you preferred that to vaginal penetration?

There are women who claim to have been prostitutes, write a book about it and change government policy (as you have done). We know for sure that at least one of them has fabricated it. In the Netherlands there was a woman called Valérie Lempereur who did just that.

When Rupert Everett said to Rachel Moran in the documentary that factory workers too are forced into what they do by poverty, she replied that she was offended by what he said. Then she said 'You don't go into a factory and have the boss put his penis in your mouth ...'. I don't see why she was offended, he made a valid point. I am offended by her dishonesty, as we all should be.

Below I have put a transcript of my exchange with Meghan Murphy. When I first started commenting on her site I used my usual persona 'Pyramus', same as on this blog. More recently though I was on Facebook and instead of bothering to log in with Google and my usual persona, I used my Facebook persona which is 'Jennifer Shaw'. I have had this Facebook persona for years and it has been useful but I don't expect Ms Murphy will be happy when she knows Ms Shaw is really a man: she doesn't seem to like women who are really men, which is what she thinks trans women are.

This is the transcript:-

Meghan Murphy: The women leading the abolitionist fight are women who survived prostitution... Also transition house workers, grassroots activists, etc. You don't seem to have any idea who or what you are talking about. It is ridiculous to claim that either people who have lived this or women who are fighting male violence against women, for no other reason beside the fact that they care about women's lives and wellbeing, are 'seeing everything through ideological blinkers' or 'don't care about victims'. You should actually get out and talk to the people you claim to be critical of. You are the one who appears to exist in a bubble of your own making.

Meghan Murphy: Again, because you are saying things that aren't accurate. You don't understand the politics or activism of those you are attempting to criticize.

Me (Jennifer Shaw): So why is it that you don't seem to have any concern for the victims of other types of modern slavery? Why is it that you use false statistics? Why do you want the Nordic model when you know damn well that it doesn't work?

Meghan Murphy: Oh gawd. You are full of shit. Stop lying. This is a waste of time if you are just going to be dishonest. 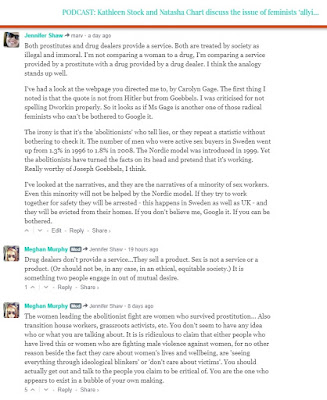 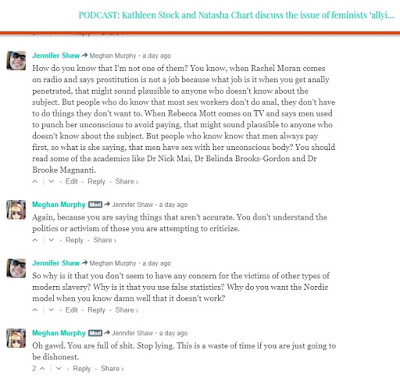 There was another revealing discussion I had with Meghan Murphy on the same web page. The page is about feminists and right-wing social conservatives coming together in campaigns. What I said was that these two groups often have a hidden agenda. They say that they want to help women involved in prostitution, but really they just don't like men and women having sex - especially if it's outside a long-term relationship.

She said that I should 'engage with people's arguments with integrity, fairly and in good faith' and not accuse people of having a hidden agenda. My reply was that she had called Amnesty International as 'pro-prostitution' and having 'trafficker allies'. I then went on to say that radical feminists such as Julie Bindel, Catharine MacKinnon and Andrea Dworkin believe that women are objectified if they have sex with men - even if they are married - and espouse lesbianism.

She didn't believe that she had said that about Amnesty and challenged me to say where the quote came from. She didn't believe that Bindel etc had said women shouldn't have sex with men. She wrote 'What on earth are you talking about? No one has said this. Not Bindel. Not Dworkin. You really need to try reading and listening before attempting to form arguments. You just sound dumb.'

So I gave a Bindel quote from a Guardian newspaper article and a quote from the Stanford Encyclopedia of Philosophy about MacKinnon and Dworkin. Her rather pathetic reply was that I just didn't understand their theories.

She didn't know about their theories. When I told Murphy about them she didn't believed me. When I gave quotes that proved I am right she said I didn't understand their theories! Years ago I wrote a page about the various theories of objectification from Kant, through MacKinnon and Dworkin, to Nussbaum. And she says it is me who sounds dumb!

And she says her site is "Canada’s leading feminist website"! 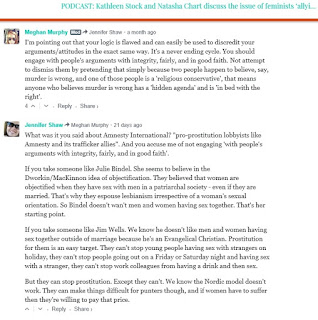 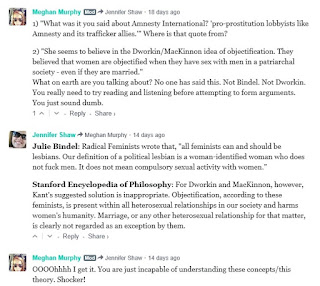 I have put on my blog a page with a previous conversation with Meghan Murphy. I gave lots of evidence that the Nordic model isn't working and harms women. I also have a page where I criticize what Rachel Moran has said.
Posted by Bête de Nuit at 12:19 PM No comments: Links to this post