Last Friday I was in Manchester and I went there again yesterday. My plan was to find the beauty that I had seen in a brothel but hadn't chosen. Then I thought I could go to the Thai massage place where I had been before. 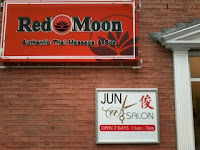 Before I went to the Piccadilly Club to try to find the beauty I decided to stop off at a place nearby that I hadn't tried. Looking at the Adult Services 18+ section in the Manchester Evening News I worked out where each brothel was. There are about 20 listed, far more than in Liverpool. The only one that I hadn't tried near the city centre was Lounge 56 in Swan Street.

I went up the stairs and a lady said that she has four women for me to choose from. At the Piccadilly Club there are four women but they are standing in a row when you come up the stairs. At Lounge 56 they came in one by one while I was sitting down. The first two were young skinny short girls which I am sure would be some men's dream girls but not for me. The third one was a plump dark skinned woman who I thought looked Brazilian. The fourth was a black woman.

I chose the plump dark woman. I think I paid £40 for half an hour but I can't remember. I thought she would be just the type that turns me on but it didn't work out that way. It could be that she spoke very little English. She said she's Spanish and I can't remember her name but it's something like Dea.

I walked along the road to the Piccadilly Club. Up the stairs there were two women available. Camille was one of them. I asked the receptionist if the pretty girl who was here last week is here. I described her. She said she didn't know who I was talking about. Then another woman came into the room who was nice so I chose her. I paid £35 for a half hour.

Katie has everything that a man could want in a sex worker. She's pretty, glamorous, easy to talk to, chatty and fun loving. In the room she took hold of my cock and got it erect. I asked her about the beauty but she said she didn't know who I meant and the rota on Fridays tends to change a lot. Katie is a young blonde woman and sounds as if she comes from Manchester.

We did a lot of things together. We did it with her on top. Then with me on top. I suggested we tried it with her sitting on the chair. I knelt on the floor in front of her and when my cock was inside her I lifted up her legs. That didn't seem to work though. I said it would be really nice to kiss her, not expecting her to accept this. She said 'You can kiss me if you want'. So we had a snog.

Even though it was great with Katie I still hadn't come. I thought I could try somewhere else. I could have gone along the road to Passions, but I thought it would be Julia again there with the older oriental woman. I could have gone to Cosmopolitan or Tropical Palms. I have been to both of them, although not had sex at Tropical Palms. Instead I thought I would try one that isn't close to the city centre but not far out. 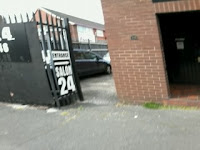 Salon 24 is at the far end of Park Street. It doesn't look a nice area, but when you get into the building it's OK. I was told I could choose between three women. Or was it four? I can't remember, I can only remember the first and last women I was offered. The first one was plump. The last one was even plumper, and looked as if she might be Italian.

We started off with a bit of a massage. I said I wanted her to lie on her back so I could see her pussy. She had a big pussy, quite nice looking. I shouldn't think that her vagina would be tight, which is what some men require. I got on top of her. It felt nice being on top of such a big woman. When we were fucking she was moving about and making noises. I said to her that it would be better if she didn't move about. She continued to make her 'Ah! Ah!' noises. I said it would be better if she didn't make noises. Then I told her what I wanted her to say. I told her to say 'Fuck my pussy'. She did what I asked and it didn't take long before I came on top of her.

I had a shower before I left. One idea I had at the back of my mind was to try and find the Red Light District in Manchester. I had found a website where it said where it is. I wasn't sure if I should bother because I have tried to find Red Light Districts in recent years, finding nothing although suspecting it might be different if I came back at 2 am. I didn't want to have sex there, I just wanted to see what it's like.

So I went down Fairfield Street near Piccadilly station. I didn't see any prostitutes in the streets I looked in. I wasn't really expecting to, it was mid afternoon. Then at the corner of St Andrew's Street and Helmet Street I saw them. There was a fat woman standing on the corner trying hard to attract business. There was a black woman and an old white woman sitting on some steps. In Helmet Street I could see a woman sitting on a wheelie bin on its side.

The fat women tried to talk to me but I walked past. These were the sort of women so familiar to me yet I hadn't seen for years. I felt in danger. In danger of her being a woman police officer. In danger of being robbed. In danger of meeting a woman I might become obsessed with. Not in danger of taking drugs and getting addicted: I had been in this situation before and never come anywhere near to trying what they're on. 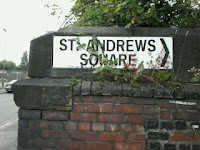 So I walked on, up St Andrew's Street to St Andrew's Square. At the northern end of St Andrew's Square where it meets Adair Street I saw a very beautiful glamorous woman. She was sitting on a wall. Well away from the other women. I could hardly believe she could be a street girl. I walked past her but looked back to see what she was up to. She looked as if she was Asian, with a dark skin.

I thought I saw her talk to someone in a car but then come back to where she had been sitting. I walked up to her. I said 'Hello'. When I said 'Can I talk to you?' she said 'I only do it in the car'. It was only then that I was sure she is a sex worker. I didn't try to talk to her after that but walked away.

So I started out looking for a beauty and not finding her and ended up finding another beauty in very different circumstances. If anyone reading this knows about either of these two beauties, please can you tell us something about them, their names and what they do. I find them fascinating and I'm sure I'm not the only one to do so.
Posted by Bête de Nuit at 3:12 PM 1 comment: Links to this post